I think one of the cool things I’ve learned this year is that Belgium apparently had quite the underground when it came to cold wave and electronica. This compilation was actually released in its first form on Sandwich Records┬Ā(a Belgian industrial label which went bankrupt in 1982) in 1981 and it only included the first half of what we see here. If you’re interested in snagging up the original pressing, it’s not going to go cheap. After┬ĀSandwich Records passed away, some more cold wave/electronica notables came out after this was released so┬ĀLTM Recordings came to save the day when they re-issued this. Not only did they re-issue it, but they also wrote up a very extensive backstory along with a short synopsis on each artist featured within this compilation. The guy who owned the label apparently went bankrupt because the rent was too high and his sales were just not keeping him afloat. After he filed bankruptcy, another label/distributor (Play It Again Sam) used the namesake until 1983. Linked below, via YouTube, are the songs from Satin Wall and Pseudo Code featured on here, so see what you think of them. Cheers! 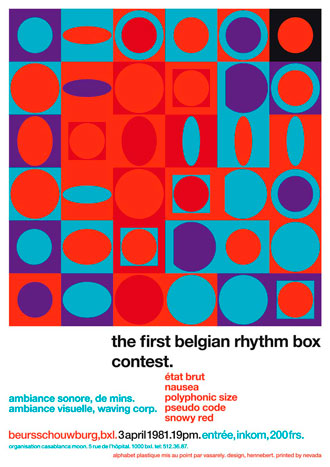 The Poster for the first “Belgian Rhythm Box”

LTM presents a limited double vinyl gatefold edition (500 copies only) of B9, the definitive collection of cold wave and minimal electronica from Belgium, recorded between 1979 and 1983.

Cover op-art by Victor Vasarely. Design by Beno├«t Hennebert, based on a poster for The First Belgian Rhythm Box Contest (1981). Liner notes by James Nice. The existing CD version of B9 is also still available (LTMCD 2486).

Thanks for rating this! Now tell the world how you feel via Twitter.
(Nah, it's cool; just take me back.)
What Do You Think of This Release?